Foto: Republika/Wihdan Hidayat
The king was impressed by the ancient Buddhist temple's architecture.

The king was impressed by the ancient Buddhist temple's architecture, Central Java Governor Ganjar Pranowo who accompanied the king during the visit, said here Wednesday. Sultan Abdullah and his family climbed the temple until they reached the largest stupa located on the top of Borobudur, the governor said.

This was the first visit of the king to the temple, while the queen had visited it several years ago, Pranowo added. Borobudur's guide who accompanied the king, Panggah Ardiansyah, said Sultan Abdullah enjoyed the scenery around Borobudur from the top.

During the four-day visit to Indonesia between August 26 and 29, the royal couple is scheduled to travel to Yogyakarta to meet Governor of the Yogyakarta Special Province Sri Sultan Hamengkubuwono X and visit several historical sites. On Tuesday, Indonesian President Joko Widodo (Jokowi) and King Sultan Abdullah discussed efforts to intensify bilateral cooperation between the neighboring nations. 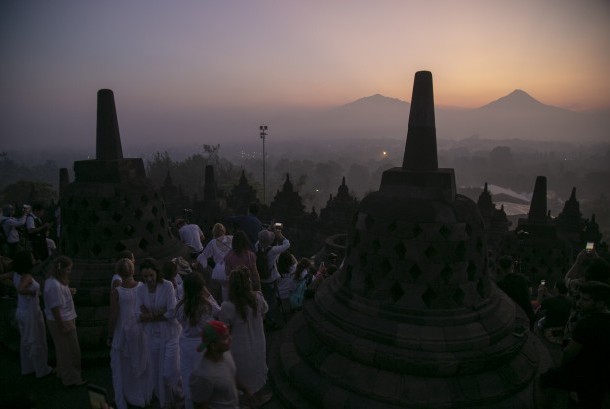 "We discussed trade and investment relations as well as other issues, in general because Malaysia is one of our most influential partners in the fields of trade, investment, and tourism," Indonesian Foreign Affairs Minister Retno L. P. Marsudi remarked after the bilateral meeting ended at the Bogor Palace, West Java, on Tuesday.

A meeting between Indonesian and Malaysian delegations was also held at the palace. Both nations should unite in the fight against palm oil discrimination, Marsudi said. The President also spoke of Indonesia attempting to find a way to absorb national palm oil production for domestic consumption. Cooperation between Indonesian state oil and gas company Pertamina and its Malaysian partner Petronas was also discussed, especially collaboration in implementing projects in other nations.