Foto: Antara/Puspa Perwitasari
Jokowi says Ba'asyir must meet the conditions to be eligible for parole.

REPUBLIKA.CO.ID, JAKARTA -- President Joko Widodo (Jokowi) asserted that the efforts to release convicted terrorist ustaz Abu Bakar Ba'asyir must be in accordance with the prevailing legal mechanism. According to Jokowi, one of the conditions was to be loyal to the Unitary State of Republic Indonesia (NKRI) and state ideology Pancasila.

The president stressed that loyalty to NKRI and Pancasila cannot be negotiable as it is a principle matter. He explained that Ba'asyir must fullfil the conditions to be eligible for parole.

"This is a parole, not an unconditional release," he reiterated.

Jokowi said he would not break the rule. Ba'asyir must express loyalty to NKRI and Pancasila in order to be paroled.

"Being loyal to NKRI and Pancasila is very basic, principle," he said to the reporters at Merdeka Palace, Jakarta, Tuesday (Jan 22).

Jokowi said that the government's step to review the release of Ba'asyir was done based on humanitarian grounds. His deteriorating health condition was one of considerations.

"I have stated that it was because humanity, ustaz Abu Bakar Ba'asyir is already old and his health condition is deteriorating. You can imagine if we as a child see our parents sick like him. That's what I mean," he said. 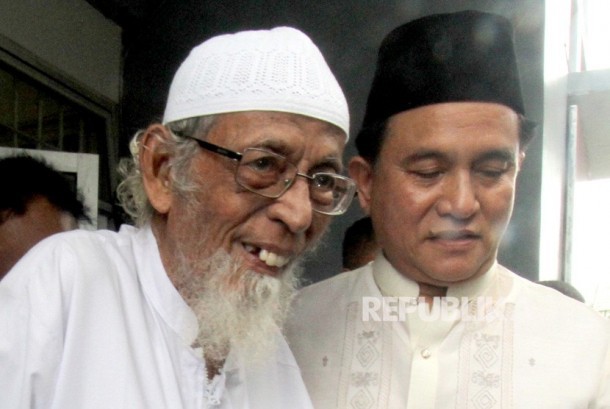 Earlier, Coordinating Minister for Politics, Law and Security Wiranto has revealed that the government is currently still reviewing the release of Ba'asyir. According to him, it was done as a response to Ba'asyir's family request submitted in 2017.

"On humanitarian grounds, the President really understands the family's request. However, some other aspects should also be considered," Coordinating Minister for Politics, Law and Security Wiranto said during a press conference at his office, Central Jakarta, Monday (Jan 21).

Wiranto explained the aspects to be considered are state ideology Pancasila, Unitary State Republic of Indonesia, and laws. Therefore, he said that President Joko Widodo has ordered relevant officials to conduct further review.