Prabowo Subianto and Sandiaga Uno handed over their documents to General Election Commission to register themselves to run for the presidential election 2019, Jakarta, Friday (Aug 10).

Foto: Republika/ Wihdan
KPU says Prabowo's and Sandiaga's documents are complete and will be verified later.

REPUBLIKA.CO.ID, JAKARTA -- Four sons and daughters of Indonesian former presidents accompanied Prabowo Subianto and Sandiaga Salahuddin Uno to register themselves to run for the presidential election scheduled in April, next year. Prabowo and Sandiaga along with their entrouge arrived at General Election Commission office at 1:30 p.m. local time after offering Friday prayers at the Sunda Kelapa mosque in Central jakarta. 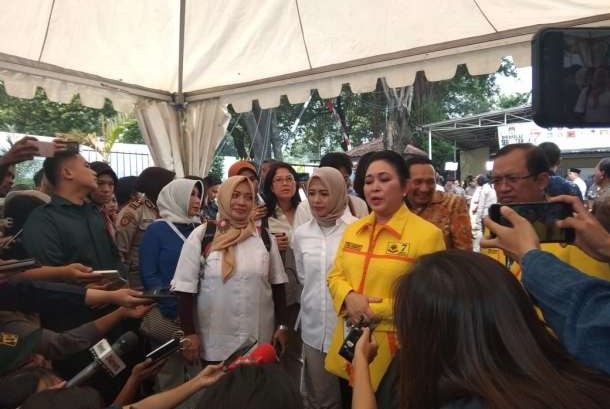 "It is a big honor for me to have them with us," Prabowo said.

Prabowo and his running mate Sandiaga Uno arrived at KPU office here on Friday to register themselves to run for the presidential election scheduled in April, next year. The pair arrived at the office at 1:30 p.m. local time after offering Friday prayers at the Sunda Kelapa mosque.

Secretary General of Berkarya Party Priyo Budi Santoso; Deputy Chairman of the board of patrons of Gerindra (Prabowo's party) Hashim Djojohadikusumo, who is Prabowo's brother; Gerindra political figure Rachmawati Soekarnoputri; and Berkarya Party politician Titiek Soeharto, were also seen along with them.

They were welcomed on arrival by KPU Chairman Arief Budiman and other KPU commissioners as well as Chief of the Election Supervisory Board (Bawaslu) Abhan and Bawaslu commissioners and election advisory board members. Head of Technical and Legal Bureau of KPU, Nur Syarifah said on Friday that Prabowo and Sandiaga have met all requirements for their nomination in presidential election 2019. They may proceed to undergo medical check up on Monday (Aug 13).

Incumbent President Joko Widodo (Jokowi) and his running mate KH Ma'ruf Amin had earlier arrived at the office for the registration. They also have met the requirements and entitled to undergo medical check up on Sunday (Aug 12).