Convicted in blasphemy case, Basuki Tjahaja Purnama (Ahok) was detained at Cipinang Correctional Institution, East Jakarta, on Tuesday (May 9) but then transferred to Mobile Brigade headquarter in Kelapa Dua, Depok, West Java at early dawn on Wednesday (May 10).

REPUBLIKA.CO.ID, JAKARTA -- Jakarta governor Basuki Tjahaja Purnama alias Ahok who is now in detention has decided to revoke his appeal against the court's sentence of two years in jail over his blasphemy case.

His lawyers, I Wayan Sudirta, confirmed to Antara that Ahok's family through his wife, Veronica Tan, has revoked the appeal.

"The information is true. His family revoked it," he said.

Veronica Tan has talked with Ahok's lawyers and after some considerations and study they decided to revoke the appeal.

Sudirta said the decision was the best of the worst that was finally taken by his client's family although they were disappointed by the verdict which they considered unjust.

He said at 14.30pm on Monday he and three other lawyers came to the North Jakarta court and not long afterwards family members of Ahok arrived informing that they would revoke the appeal.

"The reason will be formerly made known on Tuesday," he said. 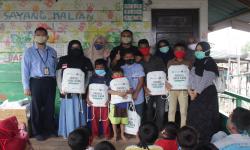