A train rammed into a minibus at a railroad crossing in East Java's Pasuruan District, in Rohkepuh Hamlet, Beji, Pasuruan, East Java, early on Wednesday (Jan 9).

REPUBLIKA.CO.ID, PASURUAN -- A train rammed into a minibus at a railroad crossing in East Java's Pasuruan District, early Wednesday, injuring seven people. All the injured had been rushed to the Bangil Regional General Hospital for treatment.

Chief of the Pasuruan District Police Adjunct Senior Commissioner Rizal M said he had yet to receive a complete report of the accident from his men on the field.

"Please contact the chief of the traffic accident unit," he stated. 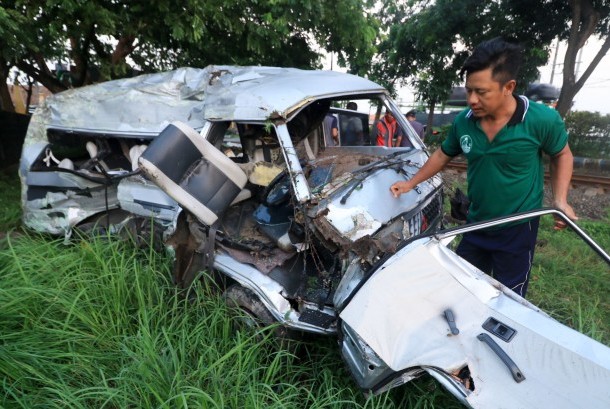 Wreckage of a minibus Mitsubisi L300 with license plate P 1264 DE. A train rammed into the minibus in Rohkepuh Hamlet, Beji Village, at 1:30 a.m. local time on Wednesday.

Chief of the traffic accident unit 1st Inspector Marti revealed that the police were still gathering data related to the accident. Some witnesses said the train rammed into the minibus when it was crossing the railroad on its way to Rohkepuh Hamlet, Beji Village, at 1:30 a.m. local time on Wednesday.

By Wednesday morning, the ill-fated minibus had not been removed from the scene and drew crowds of local onlookers.

"With the accident, we call on motorists, who will cross the railroad and highway, to comply with the traffic signs," Suprapto, spokesman for Daop 8, stated.