REPUBLIKA.CO.ID, GARUT -- Almost 600 security personnel are deployed to safeguard the first trial session of the recent case of the burning of a black flag bearing the Arabic writing of "Tawheed" at Garut District Court here on Monday. The flag burning case, which has triggered massive protests in different parts of Indonesia over the past week, involves two suspects only identified by their initials as M and F as well as a suspected bearer of the flag, identified as U.

According to Garut Police Chief Adjunct Senior Commissioner Budi Satria Wiguna, the deployment of 595 police and military personnel was aimed at securing the court's room, the court's yard, and an area outside the court building. Wiguna noted that the security personnel took necessary measures by temporarily closing access to the Merdeka Road in front of the district court as a precautionary measure against any unwanted eventuality, so the local community members were expected to respond to the trial wisely.

In connection with the flag burning case, the defendants, found guilty of violating the Indonesian Criminal Code's Article 174, are liable to face a maximum sentence of three weeks in jail. 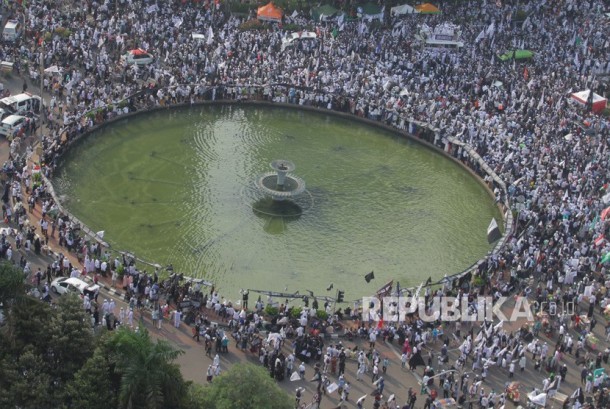 The black flag bearing the Arabic writing of "Tawheed" was burned by several members of the Nahdlatul Ulama's Barisan Ansor Serba Guna (Banser) youth wing at a commemorative event of this year's National Santri Day in Garut, West Java Province, on Oct 22. Those committing the act were quoted by local media as saying that the flag that they had burned was that of Hizbut Tahrir Indonesia (HTI), an Islamic organization that the government had banned.

The police probed the flag-burning incident, which was deplored and condemned by various Islamic clerics arguing that the flag bearing the basic creed of Islam was commonly used by Prophet Muhammad (peace be upon him). For billions of Muslims around the world, Tawheed is accepted as an absolute monotheism and Prophet Muhammad (peace be upon him) is the messenger of Allah (Almighty God). Thus, it holds an important position that differentiates Muslims from those not embracing Islam.

The Oxford Dictionary of Islam, edited by John L. Esposito (2003: 317), defines Tawhid as "the defining doctrine of Islam. It declares absolute monotheism - the unity and uniqueness of God as creator and sustainer of the universe." All true Muslims are keen to continue living with Tawhid until their death. Hence, the burning of the flag cannot then be accepted by so many Muslim community members in the country, as the Tawhid written on the flag belongs to all Muslims.

Founder of the Islamic Defenders Front (FPI) Habib Muhammad Rizieq Shihab conveyed a statement, published in a video that went viral on Twitter, that burning the flag bearing the Arabic writing of Tawhid cannot be justified for whatever reasons. Instead, burning the flag is indeed a vile deed and an insult to the absolute monotheism of Islam, the respected ulema, currently residing in Saudi Arabia, emphasized.