REPUBLIKA.CO.ID, JAKARTA -- Thousands of people staging a rally on Defend Tawheed 211 thronged the road around the National Monument (Monas) horse statue towards Jalan Medan Merdeka Barat. However, the masses, who planned to rally in front of the Merdeka Palace, could not go ahead with their plan since they were blocked by barbed wire installed on two road segments in front of the Ministry of Tourism, Jalan Medan Merdeka Barat.

Not only barbed wire, but three layers of posse of police also prevented the masses from continuing the march to the front of the Palace.

The action of Defend Tawheed 211 was originally planned to be centered in front of Merdeka Palace, Jakarta. The masses began to move towards Jalan Medan Merdeka Barat after participating in the Friday prayer service at the Masjid Istiqlal. 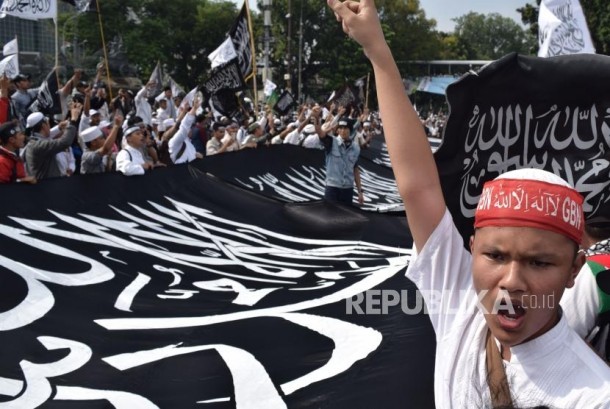 In the rally, the people demanded four points. Firstly, they demanded the issuance of an official statement from government that tawheed flag belongs to Prophet Muhammad PBUH, not a flag that belongs to any mass organizations, so it should not be defamed by anyone.

Secondly, they wanted the authorities to carry on legal process against all the parties involved in tawheed flag burning incident. Both perpetrators or intellectual actors who teach, direct, and spread hatred to fight tawheed flags should be legally processed.

Thirdly, they urged Muslims in Indonesia to maintain unity and not be easily pitted against each other by any party. Lastly, they thought that Nahdlatul Ulama Executive Board (PBNU) is obliged to apologize to Muslims over tawheed flag burning incident. They said PBNU should be free from liberalism and any kind of misguided understanding.

Despite the meeting between Nahdlatul Ulama and Muhammadiyah as the two largest Islamic organization on the flag burning incident, Slamet said the rally should be held as the law enforcement officials have not acknowledged that a black flag bearing tawheed (creed) in Arabic letters was burned on National Santri Day in Garut, West Java, Oct 22.

Until 1:27 WIB, the masses continued to trickle in from the direction of Jalan Medan Merdeka Selatan.