Liquor maker from Cicalengka sentenced to 20 years in prison

REPUBLIKA.CO.ID, BANDUNG -- A panel of judges of the Bale Bandung District court, Baleendah, in West Java Province sentenced a liquor maker to 20 years in prison after he was found guilty of mixing and selling liquor which caused the death of dozens of people.

"We have imposed criminal punishment for 20 years in prison to Sansudin Simbolon due to his actions," the panel of judges, led by Titi Maria Romlah, stated when reading the verdict in Baleendah on Monday.

The verdict given by the judges to Simbolon was lighter than the demand sought by the prosecutor, who called for the defendant to be sentenced to life imprisonment. Romlah further noted that based on the facts of the trial and the testimonies of witnesses, Simbolon was found guilty of concocting the "ginseng alcoholic drink, which killed dozens of people in Cicalengka, Bandung District. 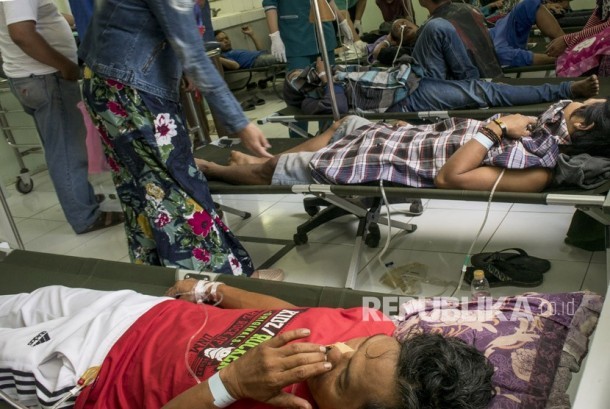 "He explained that Simbolon proved to be legitimate and convinced of guilty of participating in selling goods which resulted in the death of other persons," she revealed.

Before reading the verdict, the judge first read the ease and burdensome things. The mitigating thing is that the defendant has not been convicted.

Meanwhile, the matters that incriminate the defendant were his actions that left dozens of people dead. Sansudin, through his legal counsel Nicholas, sought time to think.

"We ask for time to think about it," Nicholas noted.

After reading out Simbolon's verdict, the judge then read out the verdict for the wife of the (oplosan) alcoholic boss, Hamicak Manik. She was sentenced to seven years in prison for being proven to be involved in the business carried out by her husband.

"We are imposing a criminal sentence of seven years in prison for Manik," the judge revealed.

Hearing the judge's decision, Manik fainted, forcing the Bale Bandung court officials to immediately rush her to the clinic.