Ustaz Abdul Somad asks people to not get provoked by hoax

Foto: Republika/Putra M. Akbar
Ustaz Abdul Somad reminds there is a big risk faced by people who believed in hoax.

REPUBLIKA.CO.ID, JAKARTA -- Ustaz Abdul Somad called on the people to not be easily provoked by hoax. He reminded that deviant sect is the biggest risk faced by people who believed in fake news.

"Do not get easily hypnotized by deviant sect," he said in a grand sermon of Islamic Book Fair (IBF) 2018 at Jakarta Convention Center (JCC), Jakarta, on Thursday (April 19).

He admitted many people often talked about him on social medias. However, he did not really question it, due to his preach was still in accordance with Islamic teachings. 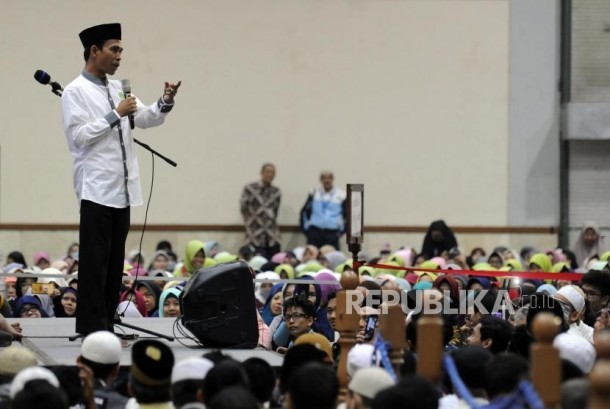 Many asked on social medias to not follow my preach, but my preach is still in accordance with the right corridor, ustaz Somad added.

Previously, Abdul Somad has asked public to be careful of fraud on behalf him through social media and also mobile phone numbers. In last January, many claims from irresponsible people used his name for personal gain.

Ustaz Somad said he never spread the kind of invitation through social media Facebook and any other messenger application. He asserted that his activity and scheduled to preach has been arranged by the official team.